If you enjoy multiplayer FPS games and have a competitive streak the size of a mile, Valorant’s competitive ranked mode is for you. When it first came out, this 5v5 FPS shooter game offered everything a gamer could want, but Riot Games has improved it even more.

With your favorite Agents, you’ve progressed to mastery. Now it’s time to find out who in the community is truly the best. Compete against other like-minded people to reach the top of the regional leaderboards. If you dare to accept the challenge, you’ll be rewarded with bragging rights.

So, before you enter into a competitive match, you need to familiarise yourself with the ranking system. Continue reading to learn more about Valorant’s ranking system, how to move through the ranks, and how the game’s Acts factor into ranking.

The requirements for being ranked in Valorant are as follows:

When Valorant was first published on June 2, 2020, the minimal criterion to begin matchmaking in the newly released competitive mode was just playing 20 unrated games. Smurfs were able to surge into the lower rankings by simply playing 20 casual games without thinking about winning or losing. Riot quickly changed the minimum criteria to 10 unrated victories in order to address the smurfing problem.

Once a player has accumulated 10 victories, they can enter competitive mode, where they must play five matches to decide their rank.

The system takes into account all factors, including performance in individual games, fragging skills, score, and whether the game concluded in a win or defeat. The player’s rank is also heavily influenced by the secret rank rating from the previous ten unrated triumphs.

There are eight ranks or divisions in the Valorant ranking system: 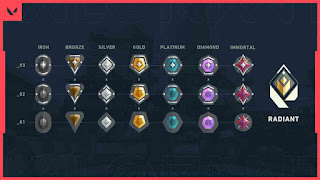 All of Valorant’s eight ranks, with the exception of Immortal and Radiant, have three tiers in each, which a player progresses through. Iron I, for example, is the lowest in the Iron bracket, while Iron III is the highest.

The most crucial component in gaining rank is winning games, but performing very well might help you rank up even faster.

Valorant, like any other competitive game, uses an MMR system to assign a score to a player based on their performance over time.

To gain MMR, players must win consistently at their current skill level. MMR does not always correspond to rank, but the Ranked Rating system allows players to keep track of their progress.

Even if the player is unaware of the MMR associated with their name, they will always be matched in a game where the average MMR is the same as the player’s, ensuring matchmaking balance.

If a player’s rank exceeds their MMR for some reason, the system will do everything possible to return the player to their intended rank.

Previously, the only method to see how far they had progressed in Valorant was to check at the up or down arrow beside their rank after each game. However, Riot added a new Ranked Rating system to the game in Episode Two: Act One update, which helps players understand where they stand in terms of development.

Rank depreciation and a new Act rank are introduced

Despite the fact that there is no concept of rank decay in Valorant, a player must play a placement game to regain their rank if they have been dormant for an extended period of time. The performance RR is computed based on the player’s performance in the game, and the player is assigned a rank that is either similar to the one they lost due to being away or close to it.